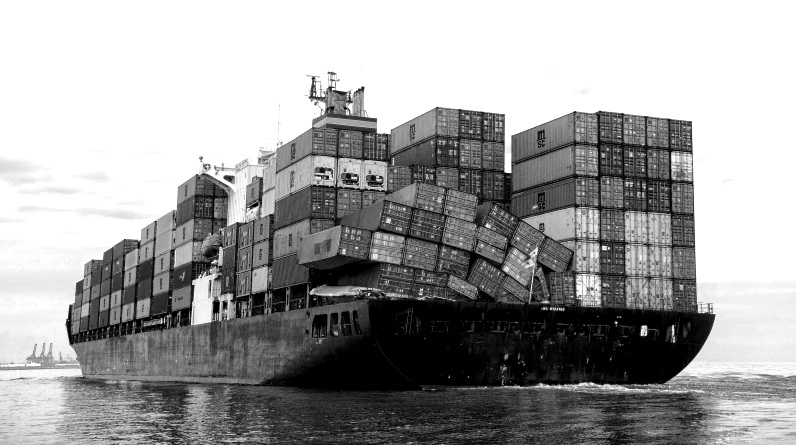 To insure or not…
… that is a question.

Having paraphrased a classic we face a dilemma with which struggle a majority of importers. In Your letters also many times a subject of insurances was arisen so being hot on the trail I ascertain that I must write about it in the end.

Do not await, Dear Readers, a ready recipe and answers for a question put in the title, but I do hope, that after a today’s article a part of You will be able to form their own opinion.
Let us begin with a fact that an insurance in the transport is – fortunately – on the voluntary basis. The only one institution which insure mandatorily in our beautiful country on the Vistula River is – in a frivolous translation – Pay, Bow, and Go Away You old man.

All the rest is voluntarily.
Making a decision about insuring your own freight should always be preceded by a risk analysis which accompany a realisation of the transport process. I propose to make an exercise which as it usually happens is based on writing out a real pros and cons of an insurance on a sheet of paper divided into half. After summing up a result should tell us whether goods should be insured or not.
Let us try to analyse insurances under two angles – costs and risks.

If it comes to insurance costs, they are not dramatically high. Our native insurance companies are ready to take an insurance risk with an insurance premium starting form one part-per-thousand from 110% of a commercial invoice value!

So, a little bit of mathematics. Let us assume that our goods are worth 10,000 USD and check out 4 pallets by sea from a popular port of Ningbo.
Let us also remind that an insurance rate is not a minimal one (since such a rate will receive only importers who long and securely run their businesses), but our cost will be 1.5 part-per-thousand, which is the most real one and possible to get with the second or third “secure” transport. From pure math calculations we know that our insurance rate theoretically should be 16.5 USD, however insurance companies use a rule that it cannot be lower than a certain amount, so our rate will be – let us assume – 35 USD.
For 10,000 USD our insurance premium is only 0.35%!

It is quite different when it comes to goods worth 100,000 USD. In such a situation an insurance cost will be 165 USD because a cost of the calculated insurance premium exceeds a minimum. Consequently, our 165 USD is only 0.165% of an amount invested in the goods!

You will shout in a moment that buying a cargo insurance policy is connected with increasing costs and consequently a decrease in trade margins.
I will say – if ‘an addition” of 35 part-per-thousand with small values is a significant costs item – so, maybe it would be better throw an import away and get a sunbath?

We hope that it is clear when it comes to costs

Now let us look closer at a risk connected with a consignment.
It is an open secret that the LCL bears a higher damage risk than on the FCL even though due to a fact in the transport process they will be repacked several times from the warehouses to containers, and inversely. Also a higher risk accompanies a carriage of the goods, e.g. in the controlled temperature conditions (refrigerated goods) than in the ordinary standard containers – this silly equipment can always break down.

Another risk constitutes carrying 1 valuable piece of a cargo (a machine, any investment goods, etc.) than, e.g. 10,000 individual pieces of a given cargo. In the first case, a cargo damage means a loss of 100% good value, in the second only in proportion to a damage size.

Potential risk factors comprise also a choice of the appropriate supplier of the transport service – and consequently – indirectly its cost.
Personally, while calculating rates for customers ALWAYS reject extreme values – the lowest and the highest -, and I consciously limit my choice to middle values.
Besides, a fact of providing itself – or not – a transport management is also one of the factors while calculating a risk in the transport. I am not especially revealing if I add that always persuade my customer to have a transport management on their side

Selecting an appropriate partner, as well as presenting by him an entire carriage process taking into account risk should give us a lot to think about. When getting rid of a transport management, unfortunately, we are in 100% bound to our intuition and goodwill of our supplier

Finally, I would like give you, Dear Readers, a few life-true examples which allow you to look on the insurance from a different angle.

Case study 1
An export of the TV sets to the UK. All fixed, vehicles convoyed in the road transport, a ship waits, a sling in the port crane and a container falls from the several metres to the quay – what happens with goods you can imagine by yourselves. The goods are not insured, and a struggle to recover money from a terminal lasts for 3 years. We eliminated almost all risks, but we stumble on the element which theoretically should not fail…

Case study 2
An export of the refrigerated meat to the Far East. 4 containers which go with one documents arrive to the port of discharging, and it turns out that in one of them a generator fails and it is a huge microbiological thread – about an aesthetic “values” extracting from its odours I will not even mention. Goods are not insured, a battle with a carrier to recover money last for 2 years and ends up in the amicable settlement what ALWAYS means a loss.

Case study 3
A CONVENTIONAL export of the carbon electrodes to the South Africa. When a ship is at sea a fire burns out and from a cargo worth nearly 400,000 USD is left almost nothing. Goods are insured, recovering money from an insurance company lasts for 3 months.

Case study 4
An import of the tea from the Far East. A ships breaks itself in the offshore areas, and a cargo like many other stays in the ocean. Due to the insurance recovering money lasts for less than a month while during a so called general average it would last for at least 3 years, and additionally NEVER we would not get the full amount of the claim.

A reality looks like as I have described above.
In case of the additional questions feel free to write

And, of course, all the time I invite you to using the seaoo.com freight services!!!!!

Previous post Do you know that… you will need invoice and...