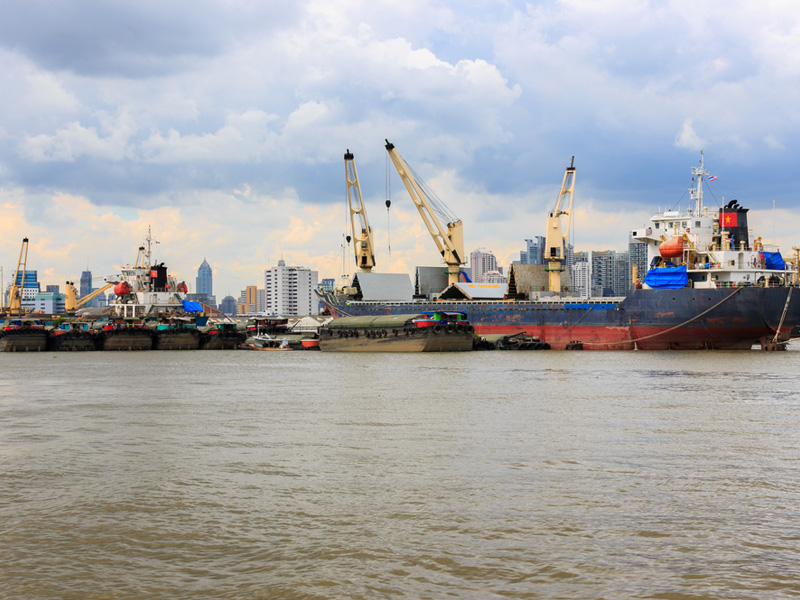 Bangkok is a seaport with the code THBKK. It is located in Thailand and is known as the Khlong Toei Port. It is an international seaport situated on the Chao Phraya River. The port is managed by the Port Authority of Thailand. It was opened in 1947. It was the only international port in the country, until 1991 when the deep-water Port of Laem Chabang. The Port of Bangkok is used mainly for cargo purposes. It is open to ships with a deadweight tonnage of 12,000 tons and less. In the first months of 2010, the port handled 11,936,855 tons of cargo. It handles 22% of cargo that are delivered to Thailand by sea. The Port of Bangkok is one of the 100 busiest container ports in the world. It has a conventional waterfront for loading and unloading of cargo. Its construction was possible thanks to the loan granted to Thailand by the World Bank. The port thrived the most in 1950. However, as was mentioned earlier, when the Port of Laem Chabang was built, the Port of Bangkok diminished in significance and fell into decline.

If you intend to import from Bangkok or you want to evaluate an export there, check our calculator for break-bulk shipments at SEAOO.com or write us an e-mail about container shipments.

Import from Bangkok to Gdynia – 38 days.
Export to Bangkok from Gdynia – 40 days.